People Who Like This
#17
Daughter of the Lost Queen
By Rhys A. Dagwood 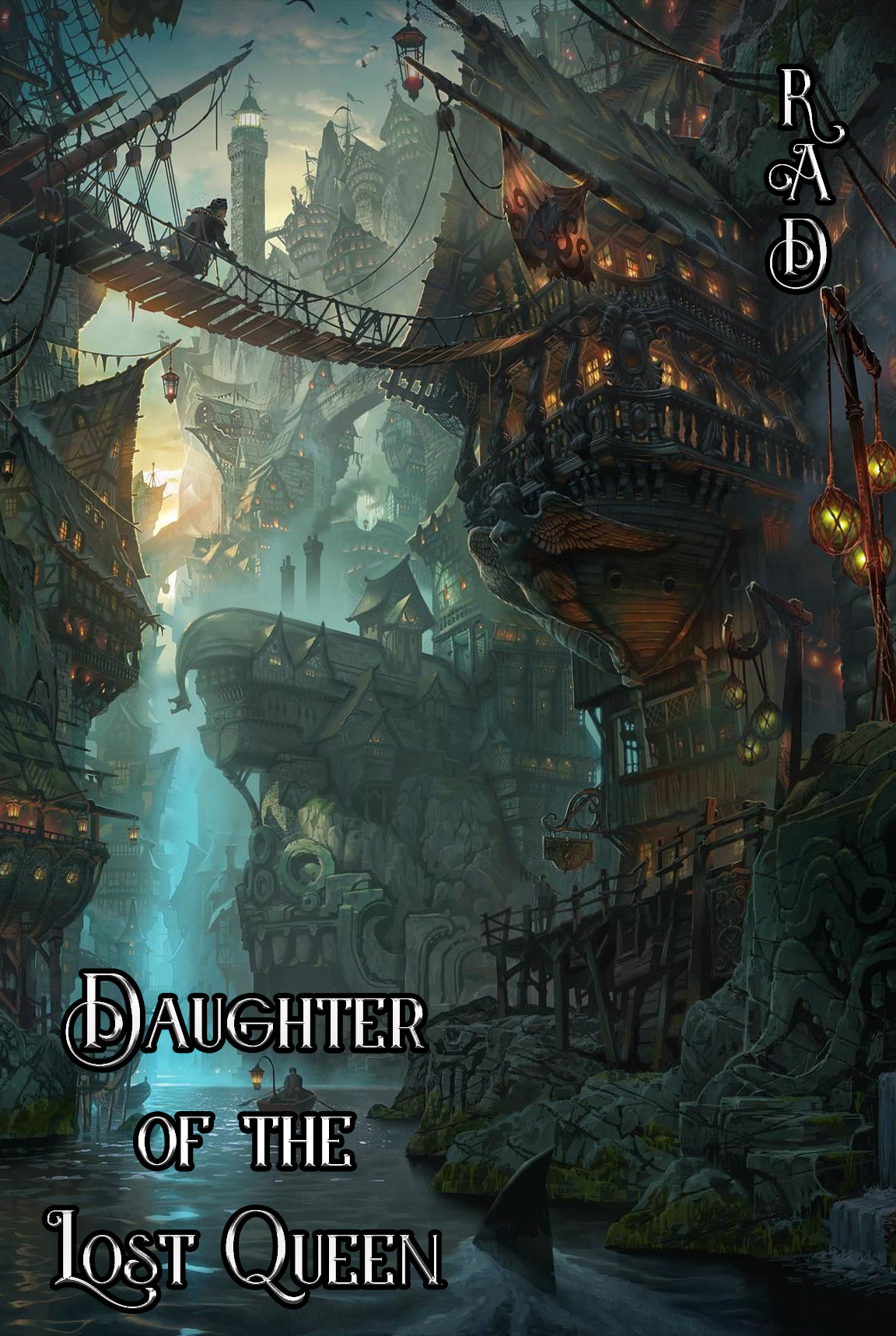 It was unusually warm out for a late October night. The breeze was calm, caressing the leaves as they fell from the trees. The streets of New Orleans were filled with young trick or treaters eagerly dragging their parents from house to house, longing for the taste of sweets and whatever goodies found their way into their plastic pumpkin baskets.copyright protection68ＰＥＮＡＮＡeU2LmRvJFs

Slowly but surely, as time wore on, the streets began to clear as it was past the bedtime of the young tikes that were hopped up on candy. Their parents needn’t worry as the sugar rush would soon wear off and a deep sleep would overcome them.copyright protection68ＰＥＮＡＮＡWEMHMbRvSw

A girl happened to be walking into her room just as the sounds from outside grew quieter and quieter. She sighed taking in the sight before her because there were clothes everywhere. Blouses were strewn across the chair, shoes littered the floor, and bottoms covered the bed. Needless to say, it was an absolute mess. There was nothing she could do about it now though, she had an important celebration to attend soon. It was Halloween after all and... her birthday.copyright protection68ＰＥＮＡＮＡTGjNPeuApW

A buzzing sound coming from her desk interrupted her thoughts. She walked over to see who was calling and realized it was a notification instead. A text message came in from a friend demanding to know where she was.copyright protection68ＰＥＮＡＮＡzKbJALnz9B

Taeley, plz tell me ur ready. By the time I get there, yu gotta come out right away cuz yu know it takes yu hella long 2 come out the house. I’ll b there n about 25 mins.copyright protection68ＰＥＮＡＮＡ2wiywXuJyM

Taeley rolled her eyes, her friend was as impatient as always. She typed out a quick reply.copyright protection68ＰＥＮＡＮＡJHe4NNtufG

She grabbed her crossbody purse and walked over to the mirror. She smiled as she admired her mother’s old pirate costume. She wore a cream off the shoulders shirt with puffy sleeves, that gave her superb cleavage, and paired it with a deep chocolate corset. The skirt she wore had a single layer of red velvet fabric and two layers of black lace separated by a cream layer of satin fabric all hiked up on one side with a nice velvet bow. She had on a black garter and charcoal heeled booties as well. To top it all off, she threw on a vintage chocolate pirate hat to match her corset and her mother’s favorite necklace which rested on her bosom, giving it an iridescent glow. To give her costume a genuine feel, she had two sharp daggers in holsters hidden just beside her right thigh, a chocolate quiver full of steel arrows and a strong bow to match. Having the weapons gave her comfort. A reminder of simpler times... when both of her parents were alive. Things were a lot better then.copyright protection68ＰＥＮＡＮＡ08TlgUw21E

In middle school, her mother taught her how to defend herself. She excelled in multiple types of martial art forms and as she advanced in her training, they started adding weapons to her skill set. She grew to be formidable with kunai, shuriken, and many of the other components that came with swordsmanship. However, she favored archery the most. Some days though, instead of training they played imaginary games. Her father joined in most times and that made it all the more fun. All three of them had silly nicknames as they traipsed the imaginary Isles of Vespisia and set many a sail on the Secret Cutlass, a vessel of great might and speed. Her father took on the role of a white magick wielder who went insane and forevermore became known as Zeidyr the Mad. He was the fiercest adversary of Rersiana, her mother, and her band of thieves. The legendary Red Bandits dubbed Rersiana the Queen of the Pirates and she led Taeley the Quick on dangerous expeditions exploring the Nizoi Ocean. Together they stole magick gems, wands, and grimoires in order to unlock the numerous lost treasures of Vespisia. They even raided royal ships along the eastern coast of Geniva. Although her mother’s nickname was a mere addition to her own name, Siana, Taeley still liked it and believed it to be pretty darn creative. She cherished these memories as they were really all she had left of them. That, and the props they used to play with which she had buried deep amongst the boxes in her basement. The moments she remembered the most though, were the sleepless nights because that was when her parents regaled her with epic bedtime tales that, in turn, had her dreams filled with mystical creatures and adventures much like the games they played. Her favorite one was about an ancient goddess who lived among her people and taught them how to live under the guise of a healer.copyright protection68ＰＥＮＡＮＡhv9YyhnzWC

It wasn’t until later, during her sophomore year of high school, that her mother disappeared. It was almost as if she vanished into thin air. They were just shopping in JcPennys for goodness sake. One moment her mom was showing her a cute dress and the next moment she was gone. She and her father had been cooperative with the police and the store authorities but to this day, Taeley had no idea what happened to her. She ultimately had to assume her mother was dead and had been forced to become the strong one ever since.copyright protection68ＰＥＮＡＮＡM5Y50quMzY

To get back to some kind of normalcy after that, she continued training under her father’s tutelage. It wasn’t the same but the thought was all that mattered to them both. A reminder of a simpler time, when they were all together.copyright protection68ＰＥＮＡＮＡejaCKKfJNa

Then the last blow she could handle came in the form of another death when her father passed away during her freshman year of college, which led her to completely stop training. It was the straw that broke that camel's back and it took everything in her to even want to live.copyright protection68ＰＥＮＡＮＡSQvIpY37Ti

It was now her third year at Tulane University and although the wounds had yet to heal, time was something she had a little too much of. She refused to let the deaths of her parents push her off the deep end. To keep herself busy, she slowly returned to weapons training. Since going some time without practice, she was a bit rusty but soon the muscle memory kicked in and she was almost as good as she was in her freshman year. Her parents would have been very proud of her for pressing on and making the best of her situation.copyright protection68ＰＥＮＡＮＡca6VAj8Jyb

Her phone vibrated in her hand bringing her out of her reverie but she neglected to read the message. She looked at herself in the mirror, bow in hand... a reflex one could say.copyright protection68ＰＥＮＡＮＡfTKCrAmdKx

Thinking about your parents again, are we? Her reflection seemed to mock her.copyright protection68ＰＥＮＡＮＡRQOV1QsHZG

She sighed. I will enjoy myself, I will have fun tonight.copyright protection68ＰＥＮＡＮＡxfEo4HrLK4

She repeated this mantra as she left her bedroom and made her way downstairs. Crossing the hallway into the kitchen, she opened the fridge to grab her flask. In it was Rumeur Bourbon in her favorite flavor, peach. It was slightly bigger than the normal flask but still small enough to be concealed in her purse. A peculiar thing about the container was that it never seemed to run empty, no matter how much she drank from in. It was her mother's flask, actually, which should have set off some bells in her head... but it didn't. She slipped her phone into one of the pockets in the purse a moment after that.copyright protection68ＰＥＮＡＮＡ38hRo2rv0T

Just then, a loud knock could be heard coming from the front door.copyright protection68ＰＥＮＡＮＡu7OdJrkW3i

“I’m coming!” Taeley got to the door and looked through the peephole. She didn't see anyone but assumed it was late comers wanting something sweet to snack on.copyright protection68ＰＥＮＡＮＡIhdrj8pMeI

“Sorry guys, no candy,” she said anyway as she yanked the door open and came face to face with terror itself.copyright protection68ＰＥＮＡＮＡc8Wpdahe58

A man dressed as a pirate came to be floating in front of her door. Her mouth seemed to be locked into place as a scream tried to make its way through her lips.copyright protection68ＰＥＮＡＮＡur8DwYoIKo

She could see a ship looming in the distance. Wispy sails billowed in the cool autumn wind as the rest of the crew floated her way. She quickly realized that it was no ordinary pirate by the pallid look of his skin that was so ashen she could just barely see through it. That and the fact that everything surrounding him and the ship seemed to glow ominously. But, ghosts aren’t real...copyright protection68ＰＥＮＡＮＡfbtIv1tyEV

The pirate sputtered in confusion. “Yer Majesty? It be me, yer old shipmate Tripp. I be the captain of the Secret Cutlass now.”copyright protection68ＰＥＮＡＮＡFhjjyBjLAp

Taeley was frozen in confusion and fear. Her legs wouldn’t move. The rest of the ghostly crew was now surrounding the house. Floating above the lawn, coming to rest by the cars, there were so many of them. She finally found her voice but her words came out barely above a whisper.copyright protection68ＰＥＮＡＮＡFSzrnJoj38

“Who be Taeley?” The one called Tripp asked. “We ‘ave come to bring Queen Rersiana back home. If ye not be her, then ye must be an imposter!”copyright protection68ＰＥＮＡＮＡzFr9WhrhJy

She had to think quickly. Drawing one of her daggers, she tried to cut the pirate before her but the blade pierced nothing but air. Adrenaline was pumping through her veins, helping to mask the shock when she yelled in a loud voice.copyright protection68ＰＥＮＡＮＡGJbLGGZtsn

“Hold on, back the hell up!” A sliver of hope reluctantly crept its way into her heart. When she had the pirate’s attention she asked one simple question that had been on the tip of her tongue ever since the ghostly man mentioned the fake ship she used to play on.copyright protection68ＰＥＮＡＮＡGGf0im5gNy

Rhys A. Dagwood - Lol I just did!
2 months ago ⋅ reply
You have reached the end of the story.

Rhys A. Dagwood
Into the Night

Rhys A. Dagwood
How Her Hair Turned Red

Rhys A. Dagwood
Into the Night