Reviews On Absolutely Anything

Reviews On Absolutely Anything 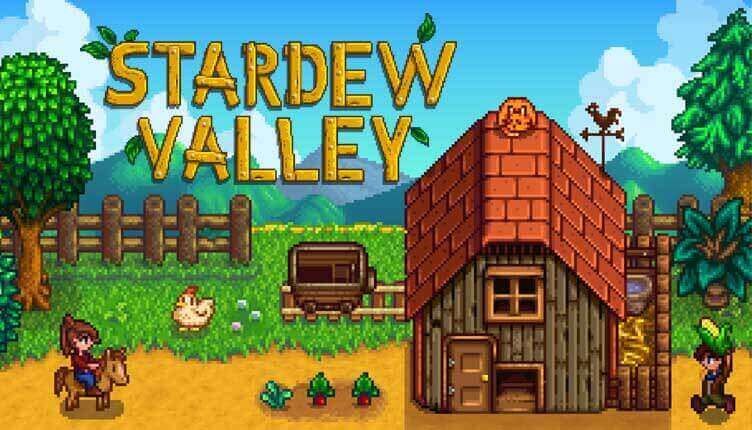 I actually did not even expect to enjoy this game, but it was a pleasant surprise once I started actually getting into it. It's a unique experience all in itself, so probably not for everyone, but for the crowd it could appeal to, here's a bit of info about it and my thoughts on it.307Please respect copyright.ＰＥＮＡＮＡg5l292etbz
8964 copyright protection303ＰＥＮＡＮＡnmoZtZY5sf 維尼

You’ve inherited your grandfather’s old farm plot in Stardew Valley. Armed with hand-me-down tools and a few coins, you set out to begin your new life. Can you learn to live off the land and turn these overgrown fields into a thriving home? It won’t be easy. Ever since Joja Corporation came to town, the old ways of life have all but disappeared. The community center, once the town’s most vibrant hub of activity, now lies in shambles. But the valley seems full of opportunity. With a little dedication, you might just be the one to restore Stardew Valley to greatness!​​​​​​​307Please respect copyright.ＰＥＮＡＮＡrPFMVDcWL4
8964 copyright protection303ＰＥＮＡＮＡRVZVQgyv3V 維尼

The closest description I could come up with for Stardew Valley would be an artistic, niche, 8-bit version of Minecraft. It's cute and fun, and includes a lot more to do than just farming the whole time. It's full of characters you can get closer to, different avenues to take in order to increase your profits, a fully customizable farm, and a lot of little easter eggs to enjoy finding over the course of the game.307Please respect copyright.ＰＥＮＡＮＡTIMET4hbmZ
8964 copyright protection303ＰＥＮＡＮＡxVzIRFU5XZ 維尼

It's a great time-waster when you have an hour or two to kill and want something that doesn't require your full attention. A nice, sit-down game to just create what you want and have fun. Not something you find all that often nowadays.8964 copyright protection303ＰＥＮＡＮＡf10hFzb34o 維尼

Perhaps that's the beauty of this game, there isn't really a distinct plot to this story! The story is what you make of it, and there's a lot of flexibility with what you can do. So, this category doesn't really apply to this video game!307Please respect copyright.ＰＥＮＡＮＡbHwxfzB23x
8964 copyright protection303ＰＥＮＡＮＡF2izt0MaMk 維尼

The one constant is that after two years, you are evaluated by a character to see how well-rounded you've created your character to be, but if you'd rather do your own thing and not care what others think, it doesn't even matter!8964 copyright protection303ＰＥＮＡＮＡd9aVFW6KfY 維尼

I'm always very critical of the characters in whatever I'm reviewing, as it is the most important thing to me. Stardew Valley does a great job of including people of all kinds to interact with and get to know. Truly, there is a character here that you can enjoy the company of. Several are romanceable, both by male or female player characters.307Please respect copyright.ＰＥＮＡＮＡ2IQXsG50d4
8964 copyright protection303ＰＥＮＡＮＡjoHY0rg2ME 維尼

There are way too many to highlight them all, so I won't even attempt it. The best way to figure out who these people are would be to play the game yourself, but I'll leave you with this note. Friendships require work and persistence. Some of your actions could lower the relationship level with characters, so you must actively maintain your spot in the community through gifts and various other things.8964 copyright protection303ＰＥＮＡＮＡyAfnXrKnfL 維尼

As you grow these friendships, you learn more and more about the people around you. People don't tell you about their closely kept secrets until they trust you, and you are not even allowed to enter a character's room until you are good enough friends. There is impact to getting to know the NPC's. There is value. It was a pleasant surprise to see that in effect!8964 copyright protection303ＰＥＮＡＮＡm0U1n8xWCq 維尼

The gameplay of Stardew Valley is structured by a day system, with a set amount of hours in the day to play, before you must either go back to sleep to skip to the next day or pass out and wake up the day after with a stamina penalty. So as far as pacing goes, again, it's really as you make it. If you're going for a grind and trying to make as much money as you possibly can, your pacing may be much quicker than the average player who is experiencing what it has to offer one day at a time.8964 copyright protection303ＰＥＮＡＮＡJYz4DidfRy 維尼

Pros to playing Stardew Valley? Almost everything is in your control. Your farm, which you have about 3 or 4 different layouts to choose from, depending on your preference, is completely customizable. You can focus just on farm animals and fill the space with coops and barns, or rather, plant a fruit orchard to take advantage of low-cost profit margins. There are many different ways to play and you have all the time in the world to do it. Because the best thing about this game is that you can play for decades of in-game years and achieve your perfect vision of a functioning farm. Spend as much time as you'd like working up to the farm of your dreams, and building the romance of your dreams, too. There's no rush on anything, and you can work at your own pace.307Please respect copyright.ＰＥＮＡＮＡZ6v0jyjIOr
8964 copyright protection303ＰＥＮＡＮＡX2y9iPGdHO 維尼

There's a lot of lovable aspects about the art style, the mechanics are easy and simple to learn, and there's even a combat system for those who like the adventuring aspect of, say, Minecraft. You can find it in some semblance here in Stardew Valley. The creator of the game has kept up with the game itself, and even actively encourages fans to make mods for it. If you're playing it PC, there's a whole lot more content available through mods than what comes standard issue with the game title. Hours and hours of fun if you're willing!8964 copyright protection303ＰＥＮＡＮＡV5QcCv8RiY 維尼

Cons of playing Stardew Valley? Well, it's not for everyone. Most may be looking for something a bit more action-packed, or a game that will take them on an epic adventure. You're definitely not really going to find either of those traits here. It's a slow-paced game for enjoyment over a long span of hours at a set pace, rather than a game where you have to actively seek the enjoyment out for yourself in order to remain entertained. If that doesn't sound like your style, Stardew Valley probably isn't for you.8964 copyright protection303ＰＥＮＡＮＡW4LwnVP9Nv 維尼

Now if you're a console gamer rather than PC, there are no mods available for the game. What you purchase is what you get. No matter how cool it would be to have a tractor garage in your farm, that is something unfortunately out of reach unless you're on PC.8964 copyright protection303ＰＥＮＡＮＡ8BTi4Zupaz 維尼

In regards to the characters, it can be easy to not care about any of them at all. You could go the entire game without having to boost your friendship with anyone, and you wouldn't be penalized for it. Granted, you'd miss out on some in-game background information and development of the world through the eyes of the NPC's, but the integral part of the game is already laid out to you, so in a sense, the characters are non-essential unless you actively seek out their stories. Which can be tedious, considering my next point.8964 copyright protection303ＰＥＮＡＮＡhCH5Wup4AX 維尼

Stardew Valley's map is very large, and you only have a certain amount of time to accomplish what you can in a single day. Time goes very quickly, in relation to your character's walking speed. To get from your farm to the quarry, for example, it could take several in-game hours, not to mention the in-game hours it takes to walk all the way back. And if you're not back at the farm by 2 am? Well, you'll be penalized with stamina the following day, and that's never a good thing. If there was a small adjustment to the speed at which time goes by, I think it would be safe to say that many people would be grateful for it.8964 copyright protection303ＰＥＮＡＮＡFTUyrcrtMY 維尼

While definitely not the sort of game everyone would be invested in, Stardew Valley definitely has it's own charm that draws you in. It's cute, low-stress, and just an overall fun experience if you let yourself become immersed in the community it tries to build. If the extremely active fanbase it still has is anything to go by, full of amazing mods and helpful guidebooks in order to achieve your in-game goal, whatever it may be, there's a lot ore to this game than meets the eye.8964 copyright protection303ＰＥＮＡＮＡUnQxPhmJaV 維尼

I don't quite remember what I paid for this on the Xbox, as it's been several years since I purchased it. I believe it was less than $20, though, so it's a fairly reasonable price for the amount of content and hours you can easily put into this game without becoming bored of it. As I stated before, what you put into it is essentially what you'll get out of it, because it requires a lot of time and effort and love to make it something very special. Each profile is a unique experience, and a fun exploration of a new way to play. You should definitely check it out for yourself if you haven't already.8964 copyright protection303ＰＥＮＡＮＡRpsqq75pi8 維尼

Do you agree with my assessment? Have something to say, or is there something I missed? Let me know in the comments, and be sure to let me know you're thoughts on Stardew Valley!307Please respect copyright.ＰＥＮＡＮＡSVXlzR5O87
8964 copyright protection303ＰＥＮＡＮＡkHfMOzi8ng 維尼