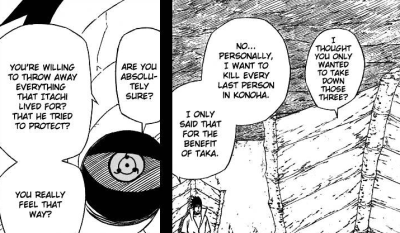 //I remembered this happening but couldn’t for the life of me find the panel in which it occurred.8964 copyright protection95ＰＥＮＡＮＡlPBdanL7v5 維尼

But basically, this confirms that Karin, Juugo, and Suigetsu did NOT know that Sasuke planned to destroy all of Konoha, but much of the fandom thinks they knew. They had assumed he only wanted to kill the three elders on the council who had ordered the Uchiha massacre. Just further confirmation that Taka isn’t as bad as people make them out to be and Sasuke knows this because he concealed this information from them - they have a moral compass, it’s just different and allows for more shades of gray than most of the Konoha characters do in their way of thinking. [X] [X] [X] [X] [X]8964 copyright protection95ＰＥＮＡＮＡjcvHpursop 維尼

Yes.  This not only supports the fact Sasuke was already becoming influenced by the Curse of Hatred, but his agenda obviously began as a selfish one. It’s clear ever since he learned the truth on Itachi, his mind was made up. Taka was initially his support, his backbone, the people he initially asked to help him on his journey; but none of the members knew Sasuke was diving off the deep end, or that his morals would become corrupted.  8964 copyright protection95ＰＥＮＡＮＡ2RGyInIPjn 維尼

Frankly, Taka is a group designed to support the anti-hero, but they don’t play a role in the actual decisions Sasuke makes.  Pretty sure all of them would’ve been dumbfounded if Sasuke announced from the beginning he planned to murder innocents. Juugo, the gentle giant he naturally is, would’ve been disturbed since it’s shown he DOESN’T ENJOY KILLING PEOPLE even when it’s out of his control. Suigetsu, who once bragged to the Otokagure prisoners about what a hero Sasuke was, and how he’d BRING PEACE AND STABILITY TO THE WORLD, wouldn’t have co-signed this either. And we’ve all seen how uncomfortable Karin was when Sasuke’s Curse of Hatred becomes too obvious to hide. If you missed all of that, then their reactions HERE blatantly display their discomfort. 8964 copyright protection95ＰＥＮＡＮＡUmmzgtUCWs 維尼

Each member of Taka has minds of their own, and while they support Sasuke they never followed everything with blind eyes.8964 copyright protection95ＰＥＮＡＮＡSSClqnva0q 維尼