People Who Like This
#4
The Isles of Vespisia
By Rhys A. Dagwood 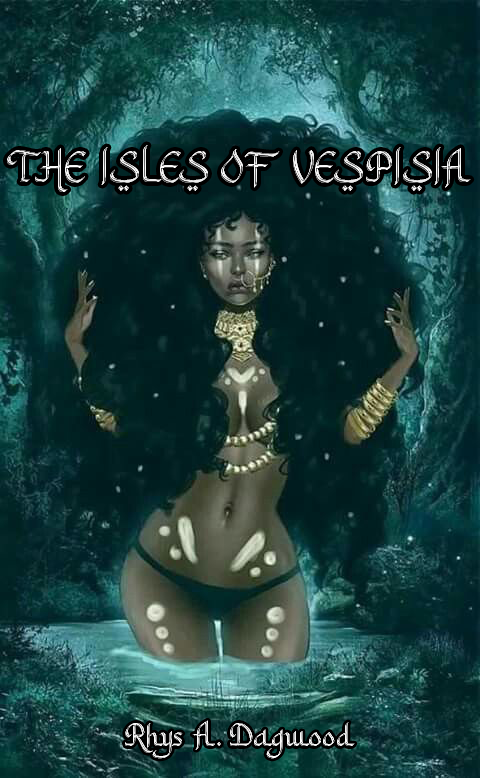 I was one of the first children to be born on Zayliv. One of three to be exact. You see, I'm a triplet and I, along with my siblings, wrought havoc on the world before it really even began... but those are matters for another time. I cultivated my talent of the quill and I would like to take the time to tell you a different tale. However, I must first recount the matter of how I came to be.copyright protection85ＰＥＮＡＮＡAhtI85BJSm

Kaidris, the god of darkness and strife, is my father and Tha'Leia, the wrathful goddess of chaos, is my mother. They were overjoyed as I grew to be a gracious deity and powerful in my own right. My uncles and father showed me the endless ways in which I could wield my energies in matters of chaos and war. You could probably say that I clearly leaned more toward these abilities, seeing as I was cast out of my home and into exile. Despite what the histories of this world have to say, I was only having a little fun... but, let me calm myself. Like I said earlier, that is a story for another day. Anyway, my mother and aunts, on the other hand, showed me different ways to use my powers through the matters of the heart, mind, and soul. But I can't ever forget about the infamous feminine wiles they taught me how to wield either. However, the faerie magick of Kienus is a special ability I possess as well. Yes, it is true. Before I was exiled, I was the chosen one. I have not the slightest clue how they chose me or why the faeries even agreed to teach me their arts but I, of course, did not refuse them.copyright protection85ＰＥＮＡＮＡHmmUXN6LOn

It was not easy at all but as a result of mastering all the magick they chose to teach me, the fae bestowed upon me the most magnificent pair of wings that I had ever seen. I am the only child of Zayliv to receive such a gift and for that, I will be forever grateful. Maybe I will one day be able to visit my tutors again in the Land of the Fae. If they allow such, I would introduce myself as Karina Dymondsong of Zayliv for that is the namesake given unto me the day I started my training with them.copyright protection85ＰＥＮＡＮＡMq894QZM6o

The older I grew, the more developed my knowledge came to be and I no longer wanted to live on Zayliv, especially after... well, you know. I wanted an epic adventure and to experience life on my own, without my darling siblings holding me back. By the time I left, more children had been born and I was no longer doted upon... not that I cared in the slightest, mind you. I left my heavenly home and traveled to the terra of the Ludrial plane, where I lived amongst the mortals and immortals there for many years. I explored the underwater cities of Atu Salis, becoming known and worshipped there as Ta'Loria. To be quite honest, I will probably go back there soon. So many magickal sights to behold. I have got to hand it to my parents, my aunts, and uncles, Atu Salis is such a treasure.copyright protection85ＰＥＮＡＮＡpCoVUyJUD9

After leaving the underwater realm, I spent an abundance of time in many of the kingdoms in Ilyria and they call me Iris. Ilyrians are a fickle people though, there is always some disaster consuming them. Why the last time I was there, my brother's wife took over the realm! However, I cannot say that I disproved of her actions... I often told my brother that his wife sought to walk in the path of tyrants and desired to rule over all. He never listened to a mumbling word I said though and merely watched as the realm almost fell apart.copyright protection85ＰＥＮＡＮＡKfYep0ynZV

Now, I didn't need to make the arduous trek to the hell realm that is Saju'Rah because I cannot stand the sight of the drezaris. No matter how many enchantments they bestow upon themselves, I can see right through them. My cousins who live there and lord over all hell bound creatures can keep that place to themselves. Anyone who willingly travels there is a fool.copyright protection85ＰＥＮＡＮＡ6Dp3hZJmge

Ahh, the aerial realm of Ermiyas. It is such a beautiful place, it almost makes up for hell even existing. It is the only place that reminds me the most of my time on Zayliv. The mighty warriors that make the heavenly cities their home, did not really call upon me like the peoples of all the other realms. I was a little upset at this and after the gentle push given to me by my mother, I knew exactly what to do. It is for that very reason why I sowed my first seeds of discord here by turning one of their own against them and eventually... the world. They learned their lesson many times over as a result of their negligence. Now they know me as Sahaquiel and worship me in the great pantheon they built in my honor, praying that they never ever lose my favor again.copyright protection85ＰＥＮＡＮＡy6OReVSTrX

After watching the world fall apart yet again, I had, at last, made my way to Jeildrai. The realm where I fell in love in more ways than one. I had grown extremely fond of this small cluster of seven islands in the Nizoi Ocean and came to cherish them as my own. It was also here that the love of my existence found me. He is called Amir Nassirian and he was a king hailing from high in the sky. He used to command legions of samgels that rode atop majestic dragons through the tumultuous stars to Quavis and back. His glory days is what he always called them, but he'll have to regale you with those tales himself. It is he who taught me how to weave life into anything I could have ever wanted. It is a talent I have quite the knack for as I have created many new creatures strewn across the realms. But it is indeed dangerous magick if used unwisely, a lesson I have long since learned. My favorite and most loved creation of all has to be that of the xahua, a very complex hybrid of an empyrean jaguar and a lycan. Unlike their Quavis-bound brethren, they have the ability to shift between forms at will and live forever if they so choose. They serve me alone, yes, but I love them as if they were of my own flesh and blood.copyright protection85ＰＥＮＡＮＡ5jlZsDDJy5

Amir also blessed me with the first of our many children, the nymphs of all the realms. Everywhere I am now called upon by my epithet, Mother of Nymphs, and all of my sons and daughters have gone on to explore the rest of the Ludrial plane. I watch over them from right here, from these very isles.copyright protection85ＰＥＮＡＮＡKMw8CJ6uE4

Many different people live here now and for the most part, they're human. Some even call this place the Islands of Misfits. They are correct in using such a namesake for most who come to live here are outlaws, pirates, scoundrels, and vagabonds. Others may just be people in search of adventure themselves like I was so many years ago.copyright protection85ＰＥＮＡＮＡVuauNYF2Q2

These are my people. They whisper my name in reverence as they sacrifice and pray to me. They say Oh Great Vespisia, goddess of mischief and mayhem, grant me power, and sometimes I give it to them.copyright protection85ＰＥＮＡＮＡbLQ2ZJb8HI

These are the enchanting Isles of Vespisia. This is my land. Won't you come and visit me?copyright protection85ＰＥＮＡＮＡ5432z7p0NB